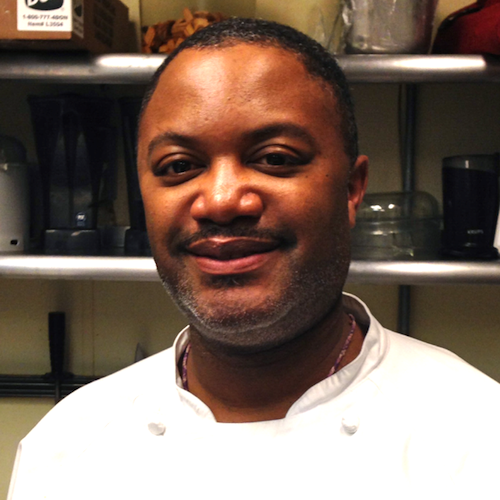 Richard James has been cooking for 30 years and has been with Chef Rick Bayless for 20 of those years. He started as the grill cook in Frontera and was promoted to sous chef a year and a half later. He eventually became managing sous chef of Frontera Grill and Topolobampo. In 2007, he became chef de cuisine of Frontera and two years ago he became managing chef of Frontera Grill, Topolobampo, and Xoco. Out of the two African Americans that hold leading positions at top restaurants in Chicago, the Chicago Tribune notes Chef Richard James as one of them.

I started off watching Julia Child and later Jeff Smith on television. I was always intrigued watching her cook. I also spent a lot of time in the kitchen with my mother and grandmother. I was taught that food should be delicious!

Simply put, African Americans are not exposed to or don't have access to restaurant that are beyond Denny's, Red Lobster and the like.None of the modern, Chef-driven restaurants open in African American neighborhoods.

Young African Americans need to be exposed to the culinary field in grammar school or at the very least, by high school. They need to be taught that being a chef can be as glamorous as being a lawyer or a doctor. As a chef, you can have a profound effect on people just as any other career can. People always remember a great meal!

Did you notice any of these themes?
Chef Richard James is one of 15 culinary insiders that we interviewed as part of a special feature on Black chefs. We identified four themes that surfaced across many of their responses and in our research. Did you notice any? Select a theme to learn more.
* The Facts vs. The Facts
* Perceptions of the Industry
* The Relevance of Color
* Exposure
comments powered by Disqus
Providing Support for PBS.org Learn More
Providing support for PBS.org Close X