Local experts on Houston food and fashion, bloggers Shanna and Felice are foodies at heart so it's not surprising that their lifestyle blog dedicates a huge portion to the chefs, restaurants and cuisine of their hometown Houston. 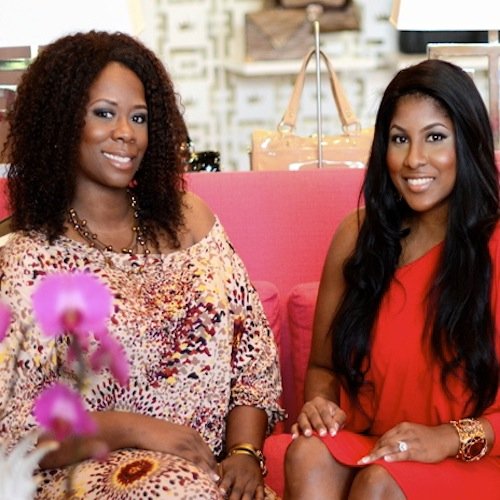 Shanna Jones and Felice Sloan have a pure and true passion for the culinary experience!  In 2011, they foundedUrban Swank, an online lifestyle magazine and blog that focuses on food and fashion in Houston, Texas. Urban Swank highlights Shanna and Felice’s experience as fashion gurus and connoisseurs of cuisine.  As hosts of the Urban Swank Channel, they give their take and taste on restaurants, chefs and events around the city. Their goal is for everyone to experience something new or something they may not have been exposed to before. Urban Swank was the recipient of the Houston Press 2012 Web Award for Best Food Blog.

Which African Americans in the food industry inspired you and how?
Shanna: I think for me, the first time I actually saw an African American chef was in Houston at Pesce: Mark Holley.  It must have been at least six years ago.  This was the first time I knew of, heard of, or had seen in person an African American executive chef in a pretty renowned restaurant, and at that time I didn't really understand how limited the field was for African Americans.  At that time, I was just dining, Tiffany Derry was the sous chef there and one of my girlfriends knew her.  I wasn't even writing about food at all, and he just came out of the kitchen and we were able to meet him.
Felice: B. Smith-- she's kind of like the black Martha Stewart.  I went to her restaurant in New York.  She's a woman in the industry, a [role] model, someone who goes from one thing to the next.  What she's been able to do as a chef-- incorporate her media personality and persona into her cooking--I find inspiring.  Tiffany Derry as well: we got an opportunity to know her on a personal level.  She's gone from home chef to sous chef, to executive chef.  Those women in the industry inspired me, African American women, you don’t see us out there, you don’t see women in the industry as a whole, but African American women are even more taboo.  You can count on your hand the number of African American women.
Based on your experiences, why do you feel there is an underrepresentation of African Americans in the food blogging world?
Shanna: I lend that to the fact that there's an underrepresentation of chefs in the culinary industry as a whole.  There's not a lot of exposure-- we don’t have anybody that's bringing us into that world to look up to.  For example, the entertainment industry, everyone wants to get in on that world because it's on TV all the time.  We were always cooking in our kitchens with our families because our culture is very family oriented.  We don't feel like we have a support system as African Americans [in the food industry].  You have a higher likelihood of being successful when you have people who look like you to look up to.  When we started, we didn't have anyone showing us what that world was about.  If you don't see anyone that looks like you doing the same thing, you have to take a jump into unfound territory.  That uncomfort with no examples and no support system is why there's not more of us out there.
Felice: I agree with Shanna, there's not many African American food bloggers.  [The lack of African American chefs and food bloggers] go together.  It's the same industry; we're not represented in the kitchen and we're not represented as writers and bloggers.  Exposure as well-- beyond people not looking like you and having [others to] guide you through, this isn't just African Americans.  As far as doing something different, it's easy to go into chain restaurants.  If you look at African Americans, there's not a lot of bloggers or chefs that look like us to expose them to a different type of cuisine.  People might say, "I have never heard of this before or my mom has never made that, I'm not going to try that."  We've travelled and gone to Food Network events, blogging events, and at all of them there is an underrepresentation of African Americans.  Experience, exposure, and not seeing anyone that looks like us.
What do you think it will take to both raise the profile and increase African Americans' representation as food bloggers?
Felice: I think what we're doing now.  We put ourselves out there to be a voice in our community as African Americans and as women to the people that come under us.  We're trying to be an example, we're trying to be the people that we didn't have.  We're trying to continue to expose a culture to the experience, take more people out of their comfort zone and expose them to a world they might not necessarily be exposed to.  And there are programs out there now to expose more younger African Americans to [the culinary industry].
Shanna: All the new programs [African Americans] are doing to expose them to this career path.  We are not a culture of trying something new.  We haven't been brought up trying new dishes. We are a "stick to what you know" culture.  We need to reach out to each other and start those mentorship programs, step out and be the voice.  That's something that we've been meaning to do.  We've been successful and more people will follow down that path [now that they've seen it done] and do things they've wanted to do for a long time.

Did you notice any of these themes?
Urban Swank, comprised of Felice Sloan and Shanna Jones, is one of 15 culinary insiders that we interviewed as part of a special feature on Black chefs. We identified four themes that surfaced across many of their responses and in our research. Did you notice any? Select a theme to learn more.
* The Facts vs. The Facts
* Perceptions of the Industry
* The Relevance of Color
* Exposure
comments powered by Disqus
Providing Support for PBS.org Learn More
Providing support for PBS.org Close X