A graduate from the prestigious La Varenne Ecoloe de Cuisine in Burgundy, Chef Tanya is a pioneer in “new soul food” as she aims to make traditional African American cuisine gourmet. 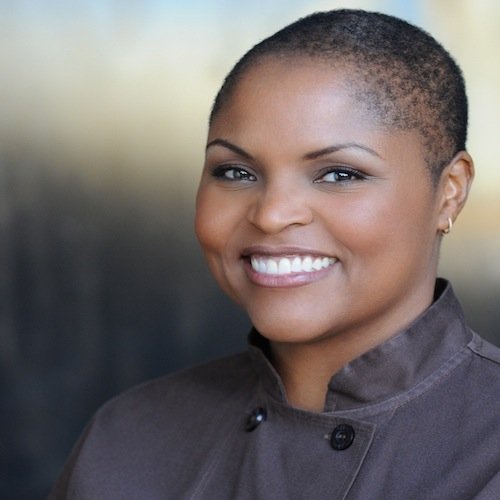 Celebrated Chef Tanya Holland has been a visionary force in the culinary world for over 20 years. With an eye on elevating the cuisine of her heritage, Tanya pioneered the popular "new soul food" movement. Her incredible resume includes receiving a Grand Diploma from La Varenne Ecole de Cuisine in Burgundy, France; television host on The Cooking Channel’s Melting Pot; cookbook author of New Soul Cooking; founder of the famous Brown Sugar Kitchen and B-Side BBQ award-winning restaurants and culinary instructor at the prestigious Cambridge Culinary Institute.

At the time [I was developing as a chef] I was in New York, and I went to school in France, so it was mostly New York and French chefs.  Women restaurant chefs, [such as] Debra Ponzek (previously a French chef in the TriBeCa are of New York, now a caterer in Connecticut),  Anne Rosenzweig (a New York based chef) , Jody Adams (a Boston based chef), Lydia Shire (a Boston based chef) Elka Gilmore (a New York based chef).  [But] they reach a certain age and leave the business.  It's a very physically demanding the job and the schedule is very grueling.  It's harder for women to find partners that support this kind of lifestyle.

Patrick Clark, who was the first African American to get a three star review in the New York Times, also inspired me.  Between the women and him, I felt like I could do it.

I interviewed with Jody, and she sent me to Boston.  Debra gave me a five course meal-- I took in [her] quality of food and discipline and feminine chef posture: quiet and reserved and humble.  I took a class called "Business of Food" where Patrick spoke, and later I met with him.  He suggested I leave New York and go to a smaller city to become more established.  He was right.

I don't necessarily think there is; I think there is a lot of representation in lower tier restaurants and I think a lot of it is because of politics.  When I was growing up I experienced a lot of blatant racism, even more so than in France where hard work was enough. Here they weren't used to an integrated environment and they couldn't relate to me.

Here they say, "We don’t get the [African American] applicants," but I know that's not the truth.  It starts in management.  It doesn't happen in my restaurant because I make the decisions.  I hate to simplify it that way, but I think it's just racism.  Also, for generations African Americans only had certain options, and now they steer you to law, engineering--especially for educated African Americans.  [They ask] "Why would you go down that road if you didn’t have to?" because it seems subservient to them.

What do you think it will take to both raise the profile and increase African Americans' representation in the field?

I really see it happening, [we] just [need] more African Americans going to the formal culinary programs.  I think it's going to happen really soon.  If you look at the cooking show contests on TV, there are more faces of color.  I think everything that needs to happen is happening.  One of my goals is to be known as one of the African American voices in food-- if the students could see more examples of people who have the credentials and have the successful businesses, that will also give them more hope.

Did you notice any of these themes?
Chef Tanya Holland is one of 15 culinary insiders that we interviewed as part of a special feature on Black chefs. We identified four themes that surfaced across many of their responses and in our research. Did you notice any? Select a theme to learn more.
* The Facts vs. The Facts
* Perceptions of the Industry
* The Relevance of Color
* Exposure
comments powered by Disqus
Providing Support for PBS.org Learn More
Providing support for PBS.org Close X