A veteran of the food industry and expert on Southern cuisine, Chef Joe Randall opened his own cooking school, where his motto is: “A little South in your mouth.” 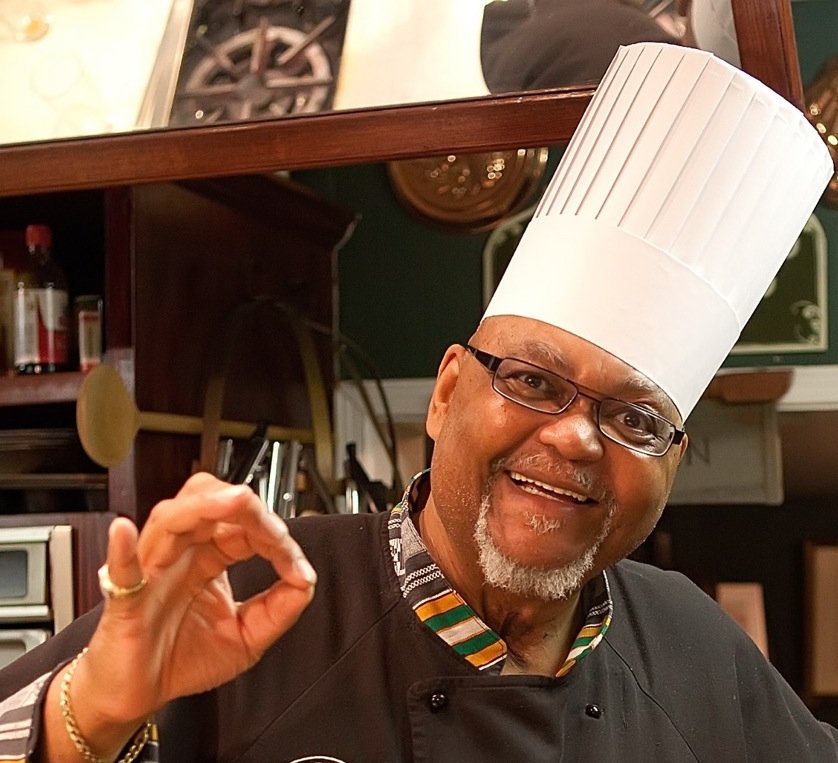 Joe Randall is a fifty-year veteran of the hospitality and food service industry. The depth and range of his experience and his dedication to professional excellence have earned him the respect of professional chefs as well as restaurant managers and owners. He is noted for his capacity to teach, guide and advise others in the practical aspects of food quality and profitable food-service operations. Randall has worked his way up through the ranks from Air Force flight line kitchens to executive chef post at a dozen restaurants, including the award-winning Cloister Restaurant. He loves sharing his cooking with others so much that he opened his own cooking school in Savannah.

Well I'm 66 years old, so my generation is unique.  Some people who inspired us were born in 1900.  I had an uncle, Richard Ross, who was a caterer and restaurateur in Pittsburgh in the 20s, 30s, 40s.  My father was a doctor, and both were treated with respect.  He was [also] a chef and a businessman and an entrepreneur. My mentor Robert W. Lee, executive chef at Harrisburger Hotel, was the first African American executive chef in Harrisburg, Pennsylvania, from 1939-1967. There were young white cooks who didn't want to work for him. He brought Atlanta-based cooks who had already worked for him to Pennsylvania and ran that hotel with an entire African American crew.  I came along in 60s and was one of the last to get his grace.  It took me two years as an apprentice and I finally earned a job.  My advice to any aspiring cook is to find out who the best chef in the city is, where they are, and go work for them.  Lee was a manager, he was a people person, he had 30, 40 years of skills.  I learned a lot from him.  He was a southern cook in the 40s, 50s, and 60s with very, very strong influences from the south.  Frank Castelli, executive chef at Penn Harris Hotel [also influenced me].  He was Italian/European trained, at the decorative end of industry.

Catering was something that was pretty much dominated by African Americans in the early years in Philadelphia, Pittsburgh and New York.  Nathaniel Burton inspired a lot of the early New Orleans chefs-- kind of life Chef Lee, brought in others and trained them.  Prior to 1977, chefs in America were considered domestic workers, then the U.S. Department of Labor reclassified them to professionals.  Prior to 1977, most people [in the south] in the industry were African Americans.  Considering food service as a whole-- African Americans and Caribbean immigrants-- that was the work that was left open,  that was one of the doors that was open.  In 1964 when Lyndon Johnson signed the Civil Rights Act, one of the first things African American leaders said was that we don't have to work in your restaurants anymore.  Parents sent their children [to college] to be somebody, not to do domestic work, with low wages, long hours, hard work.  It still is, we just happen to have a different face on it since it's been reclassified and celebrity chefs have emerged.  African Americans have been the backbone of the food service industry.

I don't know if it's so much underrepresentation as a whole new group of people interested in food service [since 1977] entering the labor pool.  You might have 3:1 or 3:2 in certain areas--like the east coast and Chicago-- but until management changes, [until] we get more African American managers who are willing to reach out and hire some of those African American chefs, it won't change, [especially in other areas of the country].  If 60% of the chefs in America are Caucasian, 18% are Hispanic, and 13% are Asian, [just] 8 or 9 percent is left for African Americans.  [African American] cooks came from Pullman Car porters/trains, which were dining car trains on the railroad owned by Pullman Company.  That's where porters came from, the first African American union in the U.S. was the Pullman Car porters [Brotherhood of Sleeping Car Porters], founded by A. Philip Randolf.

What do you think it will take both raise the profile and increase African American's representation in the field?

I think that African Americans who are interested in food service need to understand what it takes to get there.  There is a small percentage of chefs who get on TV or get a book deal.  Marketing and promotion-- some of these guys don't know what it is to have a publicist, but it's hard work to keep your name out there.  What I recommend is to go to school and learn the fundamentals, learn the language of the kitchen so they can go to work for a chef who is good so that they can become good [Watch Chef Joe Randalldiscussing the language of the kitchen with WSAV in Savannah].  But this is what it takes, it takes more than just going to the classroom.  It takes volunteering outside the classroom, staying after hours and putting in time, participating, volunteering to be the sous chef for an event-- all this stuff adds to you for the future, and these are things I think some African Americans aren't doing while they attend school.  They don't think they can open a restaurant, and they go into catering, [but they need to taking actions] that will make you a better cook and eventually a better chef.  Present yourself as the person for the job.  [But] management [also] needs to change.

Did you notice any of these themes?
Chef Joe Randall is one of 15 culinary insiders that we interviewed as part of a special feature on Black chefs. We identified four themes that surfaced across many of their responses and in our research. Did you notice any? Select a theme to learn more.
* The Facts vs. The Facts
* Perceptions of the Industry
* The Relevance of Color
* Exposure
comments powered by Disqus
Providing Support for PBS.org Learn More
Providing support for PBS.org Close X