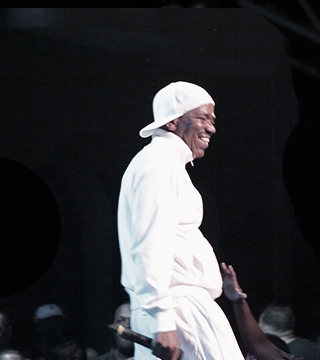 "I like to think of hip-hop as the innate love of the drum. Anything that had a funky, funky beat…  was so very, very important." - Kurtis Blow

Kurtis Blow is undeniably one of the the first artists to make a mark on Hip-Hop as the first rapper to sign with a major record label, and of course, explain to the world just what "The Breaks" are.

What do you consider the anniversary of Hip-Hop?

Kurtis Blow: Hip-Hop, to me, started around 1971, 1972. When I was thirteen years old, I gave my first party as a DJ at my good friend - Tony Rome's - 13th birthday party. I put two component sets together (back in the day, a component set was a TV, a radio, an 8 track player and a record player). So I took my mom’s component set and I took it to his house where his mom had a component set. We put both of them together and we had continuous music... and it was awesome. Awesome party. That was way before I knew that there were 2 turntables, and mixing, and continuous music that way. But in '72 I had this idea - We’re going to do this thing nonstop where we wouldn’t have to talk in-between the records and we could just make it happen. And so that was that was the first time I actually DJ'd. I was also was a B-Boy in 1972. But no disrespect to Kool Herc. If we want to claim that the start of Hip-Hop is 1973, I’ll go with it. And big ups to Kool Herc and that very first party, that back to school jam he gave with his sister Cindy back in 1973.

What were the moments and places (and people) you drew your inspiration from?

Kurtis Blow: I remember my mom, she was an avid supporter of music. I remember as a little child, even before I could read, going to the record stores in Harlem and the South Bronx. The record stores were known for having speakers outside…and they would play continuous music all day. So we would go to the corner record store, and each record store would have their own charts, like their top ten songs of the week. And it was my job to go get that chart, and look at those songs and pick those songs. I actually learned how to read by picking those charts. My mom loved the Motown Sound, and of course, Jackie Wilson and Sam Cooke. I remember going to the record stores and getting those. So I became like the family DJ.

Kurtis Blow: My mom was a great dancer, and the whole neighborhood knew about it. She was always going out to the hot spots like the Renaissance Ballroom or the Cotton Club or the Savoy Manner, places like that in the 60s and the 50s. So the word got out that she was a great dancer and people would always ask her to come out with them. So I wanted to become a great dancer like my mom. The word got out –“Little Kurt can dance!” And she would always throw me out there—“Check out my son, he can dance!” I would do my little moves and stuff. And word got out and I became popular as the neighborhood dancer and pretty soon, late '60s early '70s, the older kids found out about it and they would come and get me from the dance competitions. We weren’t Beat Boys yet - the term hadn’t been created yet. I got this reputation of being like a partygoer or a great dancer and it turned into becoming a B-Boy, dancing to the breaks of songs that were going. We’re talking about the Motown Sound. And the number one cat during that time with the funkiest beats that we could dance to because he had the incredible breaks was Mr. James Brown. And so I became a James Brown clone, he was my hero... a lot of kids around my neighborhood did. We all loved James Brown. I’d say break dancing started or B-Boying started because everybody wanted to be James Brown and repeat his moves; his splits and his fancy footwork—we tried to repeat that.

Was that part of the inspiration for “The Breaks”?

Kurtis Blow: I like to think of Hip-Hop as the innate love of the drum… The most important part of these songs was that they all had a break. A funky, funky break [ watch interview clip ]. That’s when the music breaks down to just the drums and you’ll hear (an artist like) James Brown do like a “1, 2, 3, 4—Hit it! [scats]” And we just lost our minds when we heard this! So we became researchers and, like I said, connoisseurs of music, reaching out trying to find these beats, the songs, these special kind of obscure disco funk songs that could play in the club but also had a syncopated break down beat. The break became so very important.

Kurtis Blow: I knew this as a B-Boy. So when I got the opportunity to make my first song, which was ‘Christmas Rappin’’ in 1979, my producers after that came to me and they asked me, “What kind of song would you like to do?” I said, “Well, I want to do a song with a lot of breaks in it for the B-Boys to get down; A song that we can dance to with a lot of funky breaks that we can just do our B-Bboy moves!" ... So we took those good things and bad things in one’s life as a break, a good break or bad break in one’s life. So that became one of the connotations of the song. And not only did we have funky breaks, but we had a message like the good or bad things that could happen in one’s life… it’s like a break. Or breaks on a bus, breaks on a car, breaks that’ll make you a superstar [laughs]. So the song was birthed…

You have also been at the beginning of many successful careers. Can you tell us a little about some of those artists you've influenced?

Kurtis Blow: My disco son likes to play music and have big fun, he goes by the name of DJ Run! Yea, that was a great, beautiful time of my life.

Kurtis Blow: When I went to college, I majored in Speech Broadcasting and Communication. I met another young cat who was a Sociology major. His name was Russell Simmons. We became friends. One day in school I learned - in one of my Journalism classes - that the way you make it in broadcasting is you have to go to the outskirts of major cities because its so competitive in the major city. So you go to outskirts, to the boondocks, and you get a track record. You pull out a couple of number ones in a small town and then you go back to the city. So, I thought about that. I said, “Russell, we need to go out to your hood – Hollis, Queens - and open up a club.” So we did that. We opened up a club called Night Fever Disco in 1977 and I became the house DJ. Later on, Russell started promoting me as Queens #1 DJ. In those nights and those days in traveling out to Queens, I met his younger brother. He was about five years younger than me. I sort of took him under my wing because Russell used to beat him up all the time. So I started protecting him. He became like my little protégé, my brother. And during those times, every big emcee had to have their protégé, and they would call them their “sons.”  Like DJ Hollywood (who was one of my mentors) had "The Son of Hollywood.” His name was DJ Smalls. I wanted to get my protégé.  And “Son of Kurits Blow” became DJ Run!

Kurtis Blow: So I taught him how to DJ. His dad bought him some turntables and put them up in the attic. And he really got good. I made him my DJ when I got a record deal. We traveled all around the city, playing in all these different clubs. Then I finally got my big break to go out on a national tour in 1980.  The Commodores called me up and they wanted me to be their opening act for 80 shows: "The All Platinum Tour.” I said, “Wow, we’re going out on tour, Run. We’re going out on tour!”  And what happened?  Run breaks his arm! Playing basketball with some guy down the block named Jay.  His dad says, “No, you can’t go out on tour. You have to stay in school. You can’t go out and DJ, you broke your arm.”  So, he stayed home and I went on tour. About 4 months later when I come back from tour, Joey started his own rap group called Run-D.M.C.! So, if Joey didn’t break his arm… there would be no Run-D.M.C. [laughs].

So what about the future?  What do you hope for the future of Hip-Hop?

Kurtis Blow: Oh yea. There’s a guy named Grandwizard Theodore. He’s known for creating scratching. And he was quoted as saying: Back in the day, we were MC’s – like Master of Ceremony or Mike Controllers – and we were heroes in our community. We could walk in our neighborhoods and our block and everybody knew us, and they supported us. We were icons of the community. Theodore said the MC’s built the community up, but the rapper now a days is starting to tear it down. So we need to change that. Get back to being MC’s. Forget about that paper and those drive-bys. Let’s help somebody. You’re a hero. Help your people.