"Rustin's tremendous achievement — the largest demonstration the country had ever seen — stands as one of the great soul-stirring passages in American history. "Most Americans remember Dr. King's magnificent 'I Have a Dream' speech, delivered at the end of the day, without acknowledging Rustin, the man who orchestrated the entire event."  Filmmaker Bennett Singer. 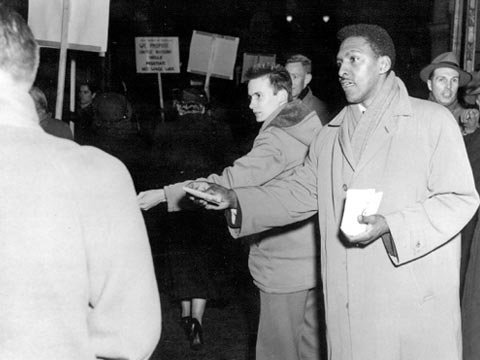 During his 60-year career as an activist, organizer and "troublemaker," Bayard Rustin formulated many of the strategies that propelled the American civil rights movement. His passionate belief in Gandhi's philosophy of nonviolence drew Martin Luther King Jr. and other leaders to him in the 1940's and 50's; his practice of those beliefs drew the attention of the FBI and police. In 1963, Rustin brought his unique skills to the crowning glory of his civil rights career: his work organizing the March on Washington, the biggest protest America had ever seen. But his open homosexuality forced him to remain in the background, marking him again and again as a "brother outsider." Brother Outsider: the Life of Bayard Rustin combines rare archival footage — some of it never before broadcast in the U.S. — with provocative interviews to illuminate the life and work of a forgotten prophet of social change.