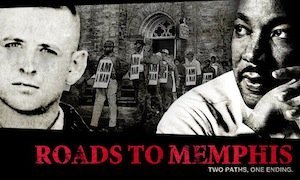 Two paths, one ending. Set against the backdrop of the turbulent forces in 1960s America, Roads to Memphis is the fateful narrative of James Earl Ray. This chronicles Ray’s path as a high school drop out, a prisoner, an escapee, a stalker of Dr. King, and the person wanted for King’s murder. Told through eyewitness testimony and the officials involved in Ray’s capture and prosecution following an intense two-month international manhunt, this is the first film to explore the mind of King's elusive assassin. It is an incisive portrait of an America on edge in that crisis-laden year and a cautionary tale of how the course of history can be forever altered by the actions of one individual.